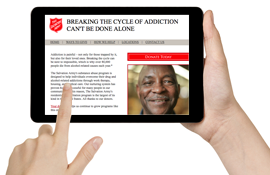 If you would like to learn more about The Salvation Army, you have come to the right place.

Red kettles and bells at Christmas. The thrift stores. These are the most common images people have of The Salvation Army. But look a little further and you will find that we offer a diverse array of spiritual and social service programs catering to the needs of children, families, seniors and individuals.

The Salvation Army began in 1865 when William Booth, a London minister, gave up the comfort of his pulpit and decided to take his message into the streets where it would reach the poor, the homeless, the hungry and the destitute.??His original aim was to send converts to established churches of the day, but soon he realized that the new believers did not feel comfortable or welcome in the pews of most of the churches and chapels of Victorian England. Regular churchgoers were appalled when these shabbily dressed, unwashed people came to join them in worship.??Booth decided to found a church especially for them — the East London Christian Mission. The mission grew slowly, but Booth's faith in God remained undiminished.

In May of 1878, Booth summoned his son, Bramwell, and his good friend George Railton to read a proof of the Christian Mission's annual report. At the top it read: THE CHRISTIAN MISSION is A VOLUNTEER ARMY. Bramwell strongly objected to this wording. He was not a volunteer: he was compelled to do God's work. So, in a flash of inspiration, Booth crossed out "Volunteer" and wrote "Salvation". The Salvation Army was born.

Our Relationship Between Ministry And Social Work

The Salvation Army is a branch of the Christian Church with social ministries spanning the globe. Founded in 1865 by William Booth in London, England, The Salvation Army challenged the complacency of Christian churches by forging a tradition of compassionate response to the poor and disenfranchised among us. Following the example of Christ, The Salvation Army believes that worship, witness and service are inseparable. While church membership is not a prerequisite for receiving services, all are encouraged and welcome to attend our churches and to take part in our many spiritual ministries.

Want To Know More? Click HERE to read more about The Salvation Army's work and ministry around the world.